Resident Alien was pitched to me as something I would like during a time where I was watching a lot of Twin Peaks. Suffice to say, I've been a big fan for some time.

One of the best parts about the series is that it never once takes itself too seriously. It feels like a light hearted read, and in my experience that's something rare for science fiction.

It’s no surprise to see comic or book adaptations fail when transitioning to a screen, but when Resident Alien was announced, it was different. For the first time in my life I felt protective of an adaptation – the kind you see in many online fandoms.

The Story of Resident Alien

Resident Alien is the story of an alien who crash lands on earth during a botched mission and finds himself residing in the town of Patience. If you’re reading the comic it’s in Washington, while the show puts Patience in Colorado. Our alien in question takes over the form of reclusive Dr. Harry Vanderspeigle who is forced to become the town doctor after the regular physician is murdered. In my laziest comparison it’s part Twin Peaks, part Northern Exposure and part 3rd Rock from the Sun. I’m grateful for this adaptation's existence, it’s a true gem of the comics world.

The rollout for this series felt long—having first been announced at New York Comic Con 2019 and then suffering the collective COVID setbacks of 2020—but the show finally made it to the SYFY channel.

What’s my first impression as a reader of the comics? POSITIVE! The show walks the dramedy line with amazing grace while staying true to the quirky roots of it’s inspiration. Resident Alien’s first episode is a great example of letting the writers, director, and cast of an adaptation flourish their creativity and innovation without feeling as though they have to be completely faithful to the source material.

I believe the teams that work on these shows and movies from comics past are doing the right thing. They deserve some space to update, tweak, and improve the original storylines. While the first season pulls it’s storyline from the first volume of Resident Alien; Welcome To Earth—it does not stay entirely faithful, but it preserves the heart of the story. 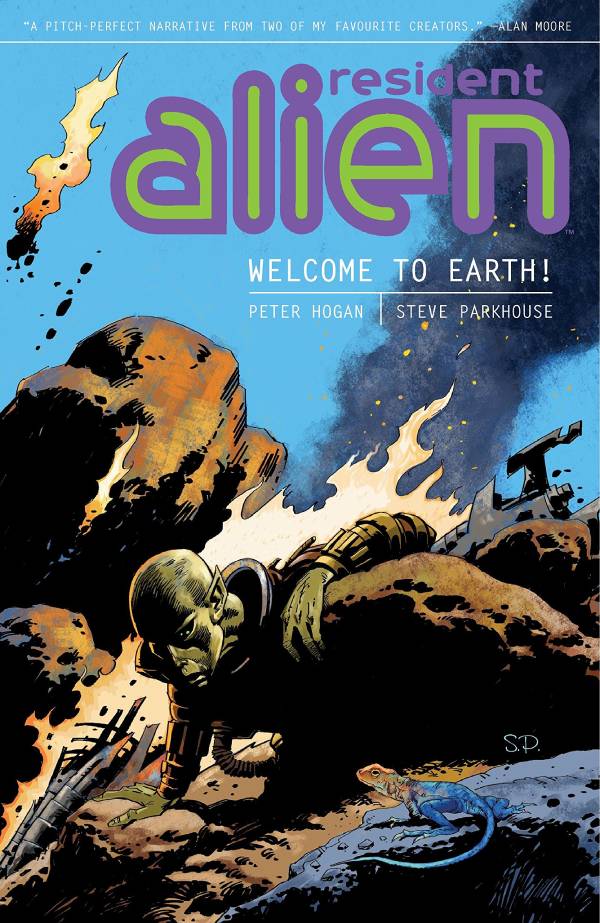 Small differences like race and age of certain characters are apparent, but the only real major change I’ve noticed so far is in Astra Twelvetrees. Her father plays a pretty significant role in the comics but in the show, she’s a runaway. With that being the only significant difference to the plot, and something that can be easily written back into the show, I’m excited to see how (or if) this plays out in the rest of the first season.

My strongest recommendation for you—even if you haven't seen the show—is to pick up the comic books. The story only gets better. With five volumes published and a sixth and final series coming out monthly, the series is 32 issues total and reads very quickly.

Volume 3 of Resident Alien; The Sam Hain Mystery, is my favorite, but really they’re all great. Dark Horse has started putting out these omnibus editions that collect three volumes at a time so you can get the entire series in just two books. The sixth and final volume is currently coming out in floppy format so you’ll have to wait a little longer on that second omnibus, but the first one is out now and readily available online or at your favorite comic shops.

Where to Watch Resident Alien

Resident Alien is available to watch on the SYFY Wire app with new episodes coming out every Wednesday at 10:00 PM ET on the SYFY channel. You can also catch some episodes streaming on SYFY.com.

The cast of Resident Alien stars Alan Tudyk, and will no doubt introduce more characters from the town of Patience throughout the first season.