So you finished the campaign of Insomniac’s new Spider-Man: Miles Morales game (or you’re just enjoying it a ton), and now you’re looking for more.

The constantly growing and changing landscape of Marvel Comics can be daunting. It’s difficult to know where to jump in or what stories to read. Well, you've come to the right site.

Introduced in 2011, Miles Morales is relatively new (in comic book years), but there’s still hundreds of issues to read and stories to dive into. Here are my top five picks for essential Miles Morales stories to read.

The classics are classic for a reason, and Miles’ first solo series is a perfect example of that.

After more than 10 years and 160 issues of his modernized take on Peter Parker, series writer Brian Michael Bendis killed the character and introduced Miles as his replacement. Teaming with artist & co-creator Sara Pichelli, Ultimate Comics Spider-Man’s first arc is all about how Miles got his powers, along with his first real adventure.

You’ll be introduced to Miles’ extended cast – his parents, his evil uncle, and his best friend Ganke (the inspiration for the character of Ned Leeds in Spider-Man: Homecoming).

It’s a great modern superhero origin that’s done in five issues. If you’re enjoying the run, we recommend continuing on to read the remainder of the volume’s 28 total issues.

It’s fairly common now for characters to crossover into different universes, but as recently as 2012 it was a pretty big deal. Couple that with the fact this was the first time EVER that the regular Marvel Universe crossed over with the Ultimate Universe (a modernized, streamlined take on Marvel comics started in the year 2000), having existed in parallel for over a decade.

By this time, Miles had become a full-fledged hero in his own right, with the Peter Parker of his universe having perished years before. Yet Peter still casts a large shadow on Miles, so when the Peter Parker of another reality shows up, it’s an opportunity for him to interact with the closest thing to the hero that he always looked up to. For Peter, it’s an opportunity to get up close and personal with what his legacy really means.

It’s touching stuff from creators Bendis and Pichelli, who do a wonderful job of exploring what makes Peter and Miles unique and distinct characters. Plus there’s lots of beautiful action—everything you’d want in a blockbuster superhero comic. 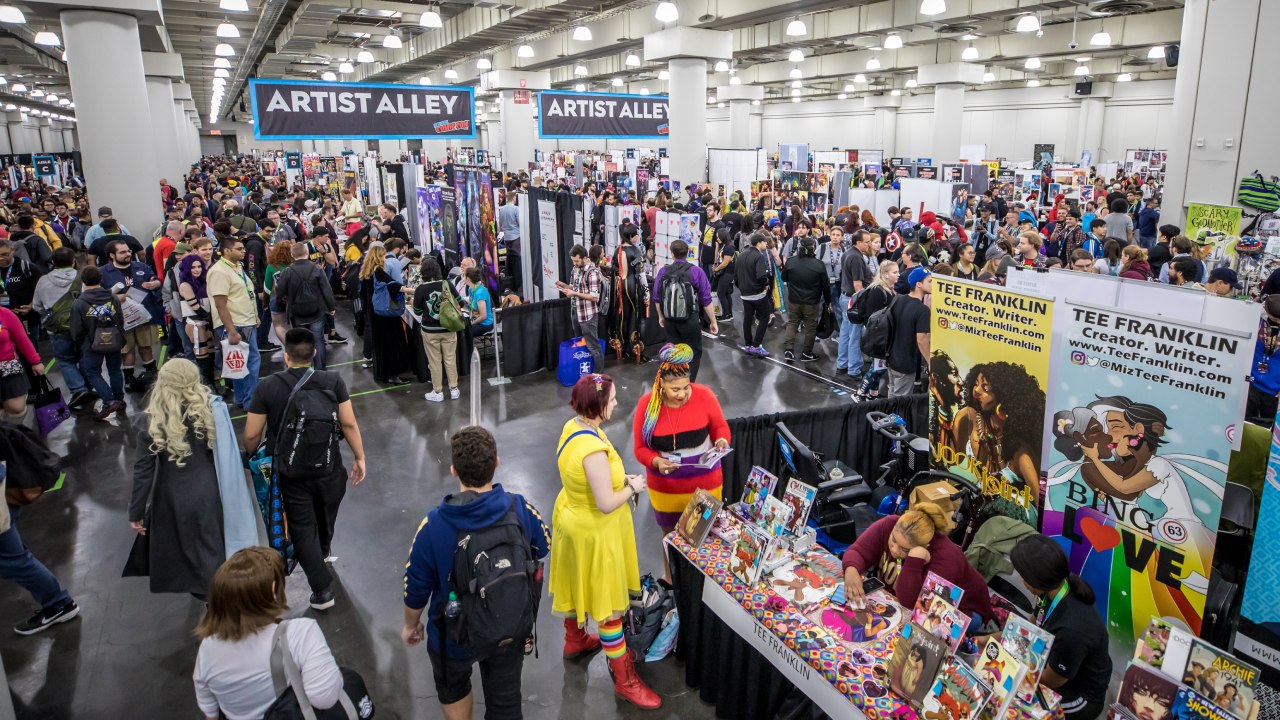 Related: 14 Graphic Novels That Make the Perfect Gift for the Comic Fan in Your Life

Before Spider-Man: Into the Spider-Verse hit the big screen, all we really had to go off of was 2014’s “Spider-Verse” miniseries. Long-time Spider-scribe Dan Slott and artist Giuseppe Camuncoli sought out to tell an event-level story that united all the alternate universe versions of Spider-Man into one story.

While the plot of the comic and the film are not really related, the Spider-Verse comic does feature an interesting premise—an evil family of universe-hopping villains are travelling the multiverse hunting down those with spider-related powers. Miles features heavily in this story, and much like Spider-Men listed above, Spider-Verse gives him an opportunity to interact with the broader Marvel Universe.

Spider-Verse (specifically it’s tie-in series) also marks the first appearances of some of the characters featured in the film—including Spider-Gwen and Peni Parker.

This is a little bit of a cheat... For starters, it’s two comics. Also; this one is not so much a story about Miles Morales, but it is important for its overall impact on the character. Plus, it’s a fantastic superhero comic, so it makes the list. Don’t @ me.

Until this point in Marvel history, Miles was a resident of the Ultimate Universe . Secret Wars was a gigantic crossover that saw all of the disparate alternate Marvel Universes collide into one, where Doctor Doom was the malevolent ruler.

Ultimate End, a tie-in to Secret Wars was the final story set in the Ultimate Universe before it’s eventual demise and destruction. While it certainly is caught up in the universe-ending stakes of the crossover, it serves as a farewell love letter to the Ultimate Universe as a whole, and it’s most popular character—Miles Morales.

There’s some great Miles character moments contained within (especially during the climax of the event), and when Secret Wars ended and the multiverse was restored, Miles had been safely transplanted into the mainline Marvel Universe (along with all of his supporting cast).

After you’ve established yourself as a solo superhero, what’s next? Join a team! The Champions are not the first super team that Miles has been a part of; but it’s the most recent and arguably the most memorable. The team’s original roster featured exclusively teen superheroes: Miles, Ms. Marvel, Nova, Viv Vision, Cyclops, and Amadeus Cho, and has since expanded to include more heroes.

Creators Mark Waid and Humberto Ramos are no stranger to teen superheroes, having previously worked together on Impulse for DC Comics. The Champions themselves have a really fun team dynamic and with Miles now a part of the main Marvel Universe, this one is a must read for fans.